24-Sept-08
Operating into and out of Woodbourne after dark was an unidentified RNZAF C130 Hercules.

25-Sept-08
Another RNZAF C130 Hercules was noted operating in the Woodbourne control zone before heading for the west coast, during the morning.

An RNZAF UH-1H Iroquoi was noted operating overhead Woodbourne during the morning.

During the afternoon Life Flight Trust BK117 B-2 ZK-HLF was noted doing training in and around Woodbourne and the control zone.

Noted on the ground at Woodbourne this afternoon was Air Freight New Zealand Convair ZK-KFL. It appears this has been in at Safe Air since its arrival on 10-Sept-08. The pilots for this were noted arriving on NZ2473 from Wellington. KFL departed for Auckland shortly before 1600 as AFN694.

Also noted were two Airwork/Airpost Fokker F27 Frienship's ZK-POH and ZK-PAX. This is unusual as normally only one F27 day stops at Woodbourne.

It also seems that Air New Zealand travel from Blenheim may finally be being dragged into the 21st century, with the noting of two automatic ticket readers being installed at the gates inside the terminal. This will hopefully mean an end to the old dot matrix printed boarding passes, and the hand checking of passenger tickets/mainfest as they board the aircraft. This should hopefully make things easier for the few Blenheim passengers who choose to use online check in as well. 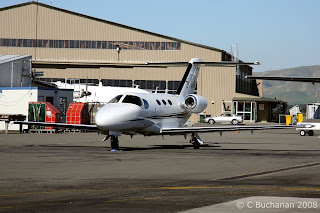 The day started with a Beech 1900D operating NZ2300 from Timaru to Wellington stopping into Woodbourne. It arrived around 0830 before continuing onto Wellington around 0845/0850. NZ2300 TIU-BHE-WLG

Today Marlborough laid to rest one of its rugby greats with the Tangi & Funeral of Jim Joesph. Jim was part of the great Red Devils team of the eary 70s when Marlborough won the Ranfurley Shield. Jim's son Jamie also a great rugby palyer emulated his fathers feats when he coached Wellington to last weekends 27-0 demolition of Auckland. Today the Wellington Lion's honored Jim by bringing the shield to the funeral. The team and shield arrived at lunchtime on Vincent Aviation Dash 8-102 ZK-VAC operating as VAL810. VAC then returned to Wellington also as VAL810. It then arrived back into Woodbourne around 2030 also as VAL810.

Sunday September 14 2008 marked the annual rememberance services for the Battle of Britain. In Blenheim this was, as most war rememberances are, held in front of the memorial clock tower in Seymour Sqaure, central Blenheim. A flyover was staged at 11am to commence the service. This was carried out by dH82A Tiger Moth ZK-BER c/n844 owned by a local Omaka based syndicate.
Posted by Unknown 0 comments

POLL TIME
Air Freight New Zealand is progressivly repainting its fleet of Convairs into its slightly modified colour scheme. This involves removing the red and blue cheat lines, and slightly tweaking the look of the titles and the logo on the tail. The old scheme is seen below on ZK-KFH with the new scheme seen on ZK-KFL. I personally think the new scheme is too dull and boring - what are the thoughts of others out there, please feel free to leave a comment with your thoughts on the change. 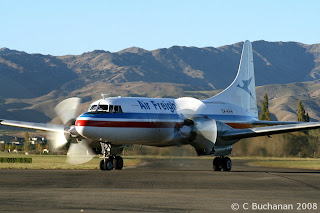 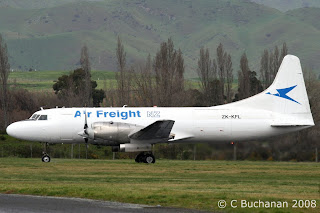 Arriving during the afternoon from Christchurch was Pionair Convair 580 VH-PAL. This Convair had been on the NZ register as ZK-PAL until 18-August-08 when it moved to the Australian register. Pionair Austalia now have 5 convairs in their fleet, with VH-PAL, PDL, PDV, PDW & PDX
Posted by Unknown 0 comments

More diversions and a Convair

Today it was Christchurch's turn to spend the early part of the day closed, due to fog. The following diversions and repositioning flights were noted around the country, as a result. 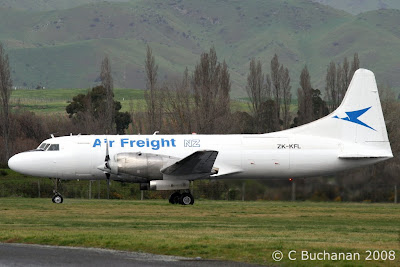 Low cloud in Nelson caused a slew of diversions into Woodbourne.

It wasn't only Nelson effected by weather with a couple of Qantas diversions noted nationally.

A brief ray of brightness in an otherwise dull, grey, wet, wintery, horrible day here in Blenheim, was the arrival around 1130am of C510 Citation Mustang N2243W 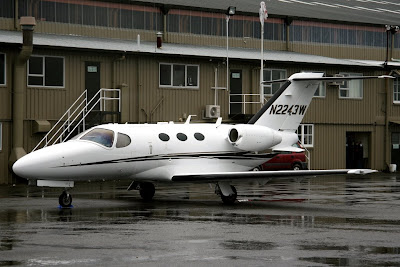 Also on the ground was Nelson based Flight Corporation Limited Piper PA-34-200T ZK-TSD operating a medical flight. It departed shortly before midday to Nelson as FCP06 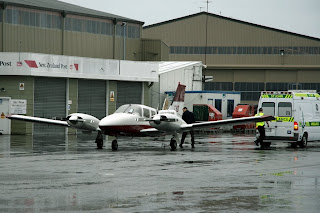 This mornings Air Nelson Q300 service AKL-BHE-AKL NZ8019/018 was cancelled.
Also noted this morning was Vincent Aviation Dash-8-102 ZK-VAC which operated WLG-BHE-WLG as NZ8963/964. Possibly with displaced passengers from the cancelled service that were re-routed through WLG.
Posted by Unknown 0 comments

A few long flights were noted this afternoon
On a shorter flight but also noteable was an A320 operating in the CHC area as NZ6313 CHC-CHC. This was a test flight of the first A320 to have the new space+ and IFE fitted ZK-OJN, which was supposed to have been completed in August.
Posted by Unknown 0 comments

A few movements noticed during the early afternoon
Also noted was Qantas/Jetconnect Boeing 737-376 ZK-JNB which was on the scheduled QF2791 AKL-ZQN. This flight diverted to Invercargill with the return leg (QF2792 ZQN-AKL) cancelled. JNB then operated IVC-AKL as QF6172.
Posted by Unknown 0 comments

As mentioned in previous blogs the only remaining Safe Air Bristol B170 Freighter in Marlborough ZK-CPT (seen above) has been given a new lease of life. For several months the spearhead of the project, Al Marshall has been fighting with a very reluctant and seized starboard engine. Over the weekend he finally got that problem fixed and the engine is now running smoothly. This enabled both engines to be run together on Sunday evening. CPT is now the only running Bristol Freighter in the world.

CPT is planned to display taxiiing under her own power at Classic Fighters Airshow at Omaka at Easter 2009. futher plans for her according to Al are

Friends of the Bristol plan on public running events every two months until Easter. There are a few of us that are also keen for a night run that should show off the effect of 28 short straight exhausts. The cowls for a good metre or so behind the exhausts are steel so I imagine the flames should be quite impressive. There is a certain rpm that the Hercules have a very distinctive note that is quite unexpected from a twin row radial. It is almost a brrrrp, brrrrp, brrrrp type sound that that almost sounds comical when they are both doing it together. I will try and quantify the cost of a ground run so that they might happen on demand from interested groups. The AHC has the odd tourbus load go through the museum and if enough interest is shown by those visitors, they can have a fully 'interactive' visit to Omaka.