Sunday 26-Oct-2008
Noted arriving in a short period this morning was a flurry of 4 Eagle Air 1900D's, the noteable movement was NZ2921 arriving from Eagle's home base of Hamilton, the other aircraft were on scheduled services.

Also noted flying in and out during the day was Sounds Air Cessna Caravan ZK-TZR still sporting its blue colour scheme. This was reportedly supposed to have been repainted into the standard Sounds Air orange scheme during the preceeding two weeks.
Posted by Unknown 0 comments

Well I'm back from my trip to Brisbane. Unfortunately time wasn't on my side so I only got to Longreach and didn't get to see any of the other museums I had planned to visit.

I had 8 flights on this trip routing BHE-AKL-BNE-BKQ-LRE-TSV-BNE-AKL-WLG-BHE. 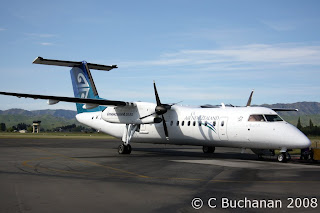 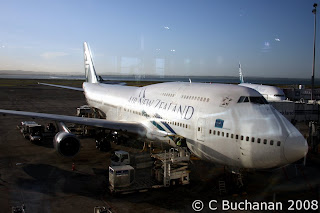 My 3rd flight of the trip was QF2530 BNE-BKQ-LRE (Brisbane-Longreach via Blackall) on Qantas Link (Sunstate Airlines) Bombardier Q300 VH-SBJ.

After my time in Longreach I caught CC143 LRE-TSV (Longreach-Townsville) on MacAir Saab VH-UYF.
This was an interesting flight as it was originally scheduled as a Saab LRE-WIN-TSV (Longreach-Townsville via Winton) it was then downgraded to a Metroliner before being reinstated to a Saab with the departure time moved forwards by 40mins and the Winton stopover cancelled! 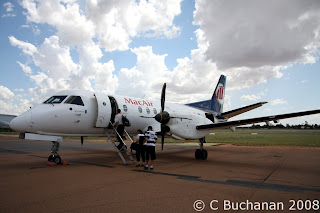 The second leg was NZ467 AKL-WLG (Auckland-Wellington), on board Air New Zealand Boeing 737-319 ZK-NGG.
This flight being delayed 20mins due to the flow on effect of the fire in Wellington Terminal earlier in the afternoon.

The final leg of the trip was NZ2459 WLG-BHE (Wellington-Blenheim) on Air New Zealand Link (Eagle Air) Raytheon Beech 1900D ZK-EAJ.
This flight was over half an hour late also due to the flow on effects from the fire.
Posted by Unknown 0 comments

Wednesday 08-Oct-2008
Arriving into Woodbourne from Wellington early evening was Airwork/Air Post F27 ZK-POH. Pics of POH in WLG can be seen on Rodney's Blog

Thursday 09-Oct-2008
Frost was forcast for the next morning so during the evening the air was alive with the sound of the frost fighting helicopters arriving from all over the country. Pics of some of these can be found on Gavin's Blog or here.

Updates
The next 10 days may not include any updates as I'm off on holiday spotting in AKL and BNE/south east QLD with trips to the Qantas Outback Founders Museum, at Longreach and the Queensland Air Museum, at Caloundra - I may get a chance to upload a few pics from there, but there wont be any updates from Marlborough. I highly recommend you view the following blogs for updates in the NZ scene until my return :)
MRC Aviation
CAP Photography
Rodney's Aviation Ramblings
NZ Civil Aircraft
Posted by Unknown 0 comments

Arriving into Woodbourne at 0900 was Brenzil Falcon 2000EX VH-CRW. It arrived from Napier and continued on later in the day to Queenstown. VH-CRW is a regular visitor to Blenheim with the owners having vineyard interests here. 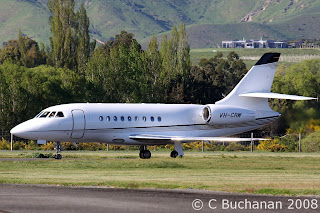 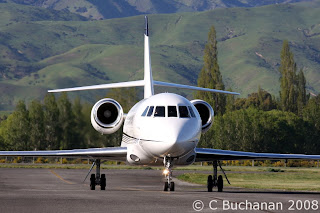 The diversions into Woodbourne were:

The following relocation/repostitioning and extra capacity flights were noted:
It has been raised that some people reading these posts are not up to play with ICAO/IATA codes and other aviation jargon used in my posts, so for their benefit (and those outside of NZ) codes used in this post
BHE - Blenheim/Woodbourne
TIU - Timaru
WAG - Wanganui
WLG - Wellington
WRE - Whangarei
WSZ - Westport
Posted by Unknown 0 comments

A97-467 then returned during the evening.

Air New Zealand Link flight NZ8019 AKL-BHE was cancelled this morning. Instead a Q300 arrived from Wellington at 1010 as NZ8941 before flying the NZ8018 BHE-AKL service delayed by almost an hour. 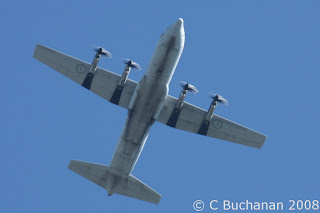 Arriving into Woodbourne between 1900 and 1930 were two RAAF C130s. First in was A97-450 in the new dark grey c/s, followed by A97-467 in the light grey c/s. They had departed Christchurch an hour earlier having arrived there earlier in the afternoon.
Posted by Unknown 0 comments

Also operating in the airspace above the field was Iroquoi NZ3814

Iroquoi NZ3814 was once again noted operating above Woodbourne.

Other movements in the area were former ZK-KLC now ZK-TZT and ZK-TZR. Sounds Air GA8 Airvan KLC had been for sale for some time and on 23-Sept it was registered as TZT. it departed Koromiko today for Taupo believed to be on delivery to Iszard Pacific Aviation. Sounds Air are to replace the Airvan with another Cessna Caravan.
Iszard Pacific Aviation Caravan ZK-TZR arrived into and departed from Omaka to/from Taupo during the afternoon.

Two airtrainers were noted still on the ground at Woodbourne early afternoon.

Also noted arriving early afternoon was Pionair Convair 340 VH-PDX making landfall in the country after a direct flight from Sydney to Palmerston North.

Arriving into Woodbourne at 1300 was Iszard Pacific C208 Caravan ZK-TZR. It had arrived with two ferry pilots on board, before departing to Wellington at 1330. It is believed that this is bound for Sounds Air. 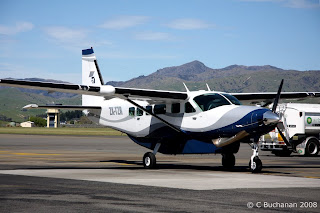