Excluding the PER-HKT-PER sectors today was the first day in a while that domestic or ex ZK aircraft haven't featured somewhere on the Bali/Trans Tasman/Pacific Island sectors.
Posted by Unknown 0 comments

What is Nyepi Day? And why are there no flights?

Today is Nyepi the Balinese 'Day of Silence' which is celebrated as part of Isakawarsa with tomorrow being Balinese New Years Day.  Although a Hindu festival, Nyepi is observed by all in Bali, a description of it follows

Observed from 6 a.m. until 6 a.m. the next morning, Nyepi is a day reserved for self-reflection, and as such, anything that might interfere with that purpose is restricted. The main restrictions are no lighting fires (and lights must be kept low); no working; no entertainment or pleasure; no traveling; and, for some, no talking or eating at all. The effect of these prohibitions is that Bali's usually bustling streets and roads are empty, there is little or no noise from TVs and radios, and few signs of activity are seen even inside homes. The only people to be seen outdoors are the Pecalang, traditional security men who patrol the streets to ensure the prohibitions are being followed.  Although Nyepi is primarily a Hindu holiday, non-Hindu residents of Bali observe the day of silence as well, out of respect for their fellow citizens. Even tourists are not exempt; although free to do as they wish inside their hotels, no one is allowed onto the beaches or streets, and the only airport in Bali remains closed for the entire day. The only exceptions granted are for emergency vehicles carrying those with life-threatening conditions and women about to give birth.

This brings to the end the transition of the former VA(NZ) fleet back into VA International.

Meanwhile as noted in THIS post - VH-YID now wearing full Virgin Samoa colours has hopped around the network operating Trans-Tasman, to Fiji, domestically in Australia, on FIFO flights in WA and to Denpasar from Perth.
Posted by Unknown 1 comments

2015 Comings and Goings to date

The first two and a half months have seen quite a few changes to the New Zealand & Australian aircraft registers in terms of passenger aircraft.  Here is a look at some other the comings and goings.

As per my previous posts between 30-January-2015 and 14-March-2015 Virgin Australia returned their fleet of 10 Boeing 737-8FE aircraft to the Australian register - see HERE for more.
Virgin Australia also received one new build Boeing during this time
VH-YIY Boeing 738 registered 5-February-2015

This leaves just Jetstream 32 ZK-VAI as the remaining passenger aircraft owned by Vincent Aviation on the New Zealand register.

Pacific disruptions due to TC Pam

There are disruptions to flights across the South Pacific today with tropical cyclone Pam effecting flights into New Caledonia and Vanuatu.

Air New Zealand has postponed flight NZ782 AKL-NOU for over 32hrs, the flight was scheduled to depart Auckland this morning Saturday 14-March-2015 at 10.05NZDT but will now depart tomorrow Sunday 15-March-2015 at 18:15NZDT.
It is not yet know if flight NZ788 AKL-VLI scheduled for 09:40NZDT tomorrow will be delayed or cancelled as the cyclone tracks south.

Meanwhile Aircalin have launched both their flights today with A320 F-OJSB departing NOU for MEL as SB110 and A330 F-OHSD departing NOU for NRT as SB800, it appears that both return flights will operate delayed.  SB111 MEL-NOU delayed from 14:20AEDT to 08:00AEDT while SB801 NRT-NOU will delay from 12:15JST to 19:15JST

VA(NZ) will no doubt still have paperwork to complete and staff to transition across to VAI before it hands in its AOC but the visible face the 10 ZK registered aircraft have returned to Australia.

Pacific Blue/Virgin Australia (NZ) commenced flying in 2004 between its home base of Christchurch and Brisbane a flight that continues daily to this date.  In 2007 it announced it would enter the New Zealand domestic market and indeed flew between Auckland, Wellington, Christchurch and Dunedin from November-2007 to October-2010. 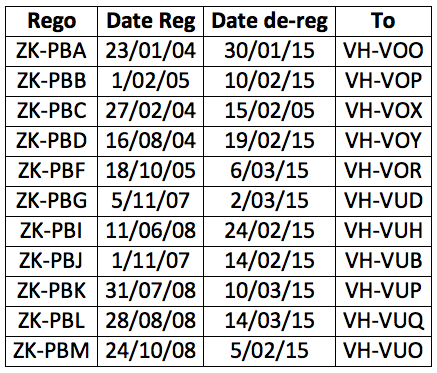 Boeing 737-8FE ZK-PBK flew her final flights as VA171/170 BNE-VLI-BNE on Monday 09-March-2015 before entering the Virgin Australia hanger.  She was struck from the New Zealand register today Tuesday 10-March-2015 and will enter the Australian register as VH-VUP.

VH-VOR ex PBF at time of writing has not entered service but will no longer carry the Virgin Samoa titles.  ***UPDATE*** VH-VOR operated her first flight as VA1384 BNE-ADL today Tuesday 10-March-2015

VH-YID flew from Brisbane to Townsville on Tuesday 03-March-2015 as VA9939 where she entered the paint hanger and was given the Virgin Samoa titles and Tupu'itea name.  Unlike PBF she does not sport the tribal colour band on the engines.  She returned to Brisbane as VA9938 on Sunday 08-March-2015 and at time of writing has not flown since.

Another first for Virgin Australia goes to VH-VUB ex ZK-PBJ which takes the honour of the first ex ZK bird to return to New Zealand.  VH-VUB operated VA160 BNE-AKL on Monday 09-March-2015

Then There Were two

Thursday 05-March-2015 saw Virgin Samoa branded Boeing 737-8FE ZK-PBF operate her final flight on the New Zealand register flying VA161 AKL-BNE.  Upon completion she was towed across the airport and entered the Virgin Australia hanger for business class upgrade and entry to the Australian register.  She will take up VH-VOR.

The latest A320 for Air New Zealand ZK-OXH arrives into Christchurch tonight Monday 02-March-2015 as NZ6397 from CNS at the end of its ferry flight from Airbus in Toulouse.

As they were built to fly domestic flights only, these Airbus A320 fleet are not equipped with HF radios so like its predecessors ZK-OXH has had to fly the CNS-CHC leg in company with another Air New Zealand flight so it can keep in communication over the Tasman Sea.

Into The Final Countdown

VA(NZ) has entered the final countdown with just 3 frames remaining on the New Zealand register.

ZK-PBG operated its final service as VA161 AKL-BNE Sunday 01-March-2015 before entering the Brisbane hanger for her business class upgrade and entry to the Australian register as VH-VUD. She was struck from the New Zealand register today Monday 02-March-2015.


At time of writing VH-VUH ex ZK-PBI had not yet re-entered Virgin Australia service.

Meanwhile despite having flown Business Class equipped aircraft on various Tasman routes for most of the past month, Virgin Australia officially launched Business Class across the Tasman with VA144 SYD-AKL on Saturday 28-February-2015.  From this date all SYD-AKL flights will offer business class.  The 3 remaining ZK registered aircraft will continue to operate but will not operate on SYD-AKL.  Currently PBL is operating out of BNE, PBF on AKL-MEL and AKL-PI services and PBK is on SYD-NAN and SYD-CHC routes.