Startup regional player Kiwi Regional Airlines has announced its proposed route network, but has already suffered a knock back at the hands of the New Zealand Government.

KRA CEO Ewan Wilson is well know in the New Zealand aviation industry having been behind the failed Kiwi International Airlines that operated LCC services Trans-Tasman and fell victim to amongst other things predatory behaviour Air New Zealand's Freedom Air.

However the New Zealand Government has confirmed it will not be revising a decision that prevents civilian flights from Whenuapai due to noise concerns.  This will prevent KRA from launching its WPE-WLG and WPE-PMR routes.

KRA's route network has been carefully chosen so the airline is not in compassion with Air New Zealand Link.


The company will be based in Hamilton, and will purchase two Saab 340 34-seater aircraft from Europe for the flights. Snacks and refreshments will be offered, and the service will include a flight attendant.


The airline is looking to add a third SF340 to the fleet once operations have commenced.  These cannot commence yet as KRA has yet to receive regulatory approval from the CAA, according to their press release, they hope to commence flights in late 2015 or early 2016.  As can be seen in the above graphic they are aiming to commence the application process on 01-May-2015.

Unlike her predecessor Mrs Mattes does not want to see scheduled RPT services from the airport, and is instead focusing on growing the general/corporate aviation hub.


"My vision for Archerfield is that it really grows on its master plan and remains Queensland's premier general aviation centre," she said. "To do that, you've got to work with the tenants to grow their businesses and, on the other hand, you need to grow the other opportunities on the airport because it needs to be run as a commercial airport, but it also needs to provide and enhance its assets for general aviation."To that account, it would be wonderful to see the general aviation from light aircraft, through to charter, through to more (Queensland) Government Air Wing, emergency services, maintenance and fixed jet base grow in this airport.

It will be an interesting challenge for Mrs Mattes to grow FBO & FIFO ops while maintaining and growing general aviation and training ops but there are other airports in the same boat in Australia and I wish her well in her endeavours, may she successfully grow Archerfield into a leading secondary airport.
Read the Brisbane Times article on Mrs Mattes appointment and plans HERE
Posted by Unknown 0 comments 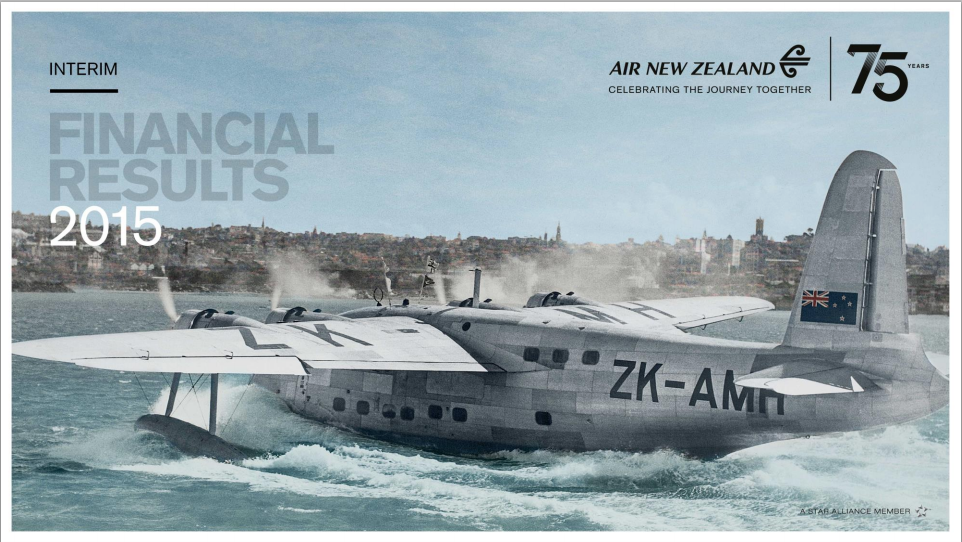 Air New Zealand have today announced their Interim Financial Results for the HY to December-2014.

Air New Zealand had a mixed result with its normalised profit up 20% to $216m, however its after tax profit slipped 6% to $133m.

Air New Zealand expect the full year profit to grow with fuel prices and hedge pricing in the second half year much lower due to weaker global oil prices.

The announcement also looks forward to the launch of AKL-EZE, new fleet arrivals, and the continues alliance with Singapore Airlines.

The airlines share price is currently up on the back of todays announcement.

The Virgin Australia(NZ) fleet has dwindled to just 4 frames with the latest entering the Brisbane hanger for reintroduction to the Australian register and business class upgrade.

Meanwhile its predecessor in the hanger VH-VOY (ZK-PBD) made its first flight this morning Tuesday 24-February-2015 as VA1384 BNE-ADL.

The CASA register has been updated and shows that 4 of the 5 ex NZ aircraft (excluding PBI) have been registered to Virgin Australia International with just VH-VUO (PBM) being registered to Virgin Australia (Domestic)  This gives the opportunity for these frames to once again fly the Tasman and Pacific Island routes with the New Zealand based crews.

However to this point only VH-VOO (PBA) and VH-VUB (PBJ) have flown international and both have operated on the Denpasar Bali routes.  Besides the remaining VA(NZ) aircraft the Tasman/Pacific Island routes have all been flown by the newer VH-YI* series aircraft.
Posted by Unknown 0 comments

VA(NZ) halfway through reintegration into VAI

The Virgin Australia NZ fleet currently sits at half of what it was, with the 5th frame heading into the Brisbane hanger for return to the Australian register and to have its business class upgrade.

ZK-PBD operated its final flight as VOZ175/176 BNE-NAN-BNE on Wednesday 18-February-2015 and was struck from the New Zealand register on Thursday 19-February-2015.  She will re-enter the Australian register as VH-VOY.

A familiar face arrives back in the region

Nauru Airlines formally Our Airline has welcomed its latest aircraft to the fleet after extensive maintenance.

Boeing 737-319 VH-YNU operated as RON801 XSP-DRW-BNE arriving into Brisbane in the early hours of the morning Thursday 19-February-2015.  VH-YNU is not a stranger to these skies as her type designator may have given away.

VH-YNU was formally ZK-NGH with Air New Zealand.  ZK-NGH was one of the last Boeing 737-300s off the assembly line, built in 1999.  She flew with Air New Zealand until Wednesday 05-November-2014 when she was withdrawn from use.  On Thursday 20-November-2014 ZK-NGH began its ferry flight from CHC via DRW to Lombok (LOP) where it overnighted.  On Friday 21-November-2014 she flew from LOP to Singapore Seletar (XSP) to undergo maintenance.

The Virgin Australia team are pumping the ex VA(NZ) fleet through now with the next bird coming to the end of her time on the New Zealand register.

ZK-PBJ ended her VA(NZ) life on Friday 13-February-2013 operating VOZ176/175 BNE-NAN-BNE before she entered the Virgin Australia hanger to become VH-VUB and have the business class installation.

The withdrawal of ZK-PBJ leaves the remaining VA(NZ) fleet at 6.  As of today Saturday 14-February-2015 none of the former fleet have operated a Tasman/Pacific service, with the services being operated by other members of the VAI fleet in the VH-YI* range.
Posted by Unknown 0 comments

Qantas have made a few route announcements in the last coupe of weeks and look set to make at least one more - here is a round up.

As mentioned in my news round up vlog post in December last year, Qantas announced they would introduce a 4x weekly A330 service on the Brisbane to Tokyo Narita route and were looking to add another port to fill the remaining 3x weekly slots.  Qantas have now announced that the BNE-NRT flight will operate daily.

Qantas have announced that from Saturday 27-June-2015 they will take over the Melbourne to Hamilton Island service from Jetstar, offering passengers a premium service on this route. QF870/871 will operate on Saturdays and Sundays with a Boeing 737-800.

With Qantas taking over their Hamilton Island service, Jetstar have announced a new 3x weekly Melbourne - Proserpine (Whitsunday Coast)  The first flight will be on Thursday 25-June-2015 with JQ831/832 operating Th-Sa-Mo utilising Jetstar's Airbus A320 aircraft.

Qantas have announced a return to the Sydney - Vancouver route with a seasonal 3x weekly Boeing 747-400 service.  Services will operate during the northern summer in June-July and again in the northern winter December-January.  QF75/76 will operate on Mo-Th-Sa

While not yet officially announced Qantas are set to return to the Perth - Singapore route with a daily Boeing 737-800 service.  Qantas last served this route in July 2104 with A330 equipment.  Timetables show the new flights, QF71/72, are set to depart from Saturday 13-June-2014


Read more about these services:

ZK-PBA / VH-VOO - left the VA BNE hanger on Thursday 5-February-2015 and operated VOZ41 to Bali.  Since that date it has operated DPS flights to/from MEL/SYD/PER/ADL/BNE and is now on domestic duties.

ZK-PBB operated its final service on Monday 9-February-2015 as VOZ171/170 BNE-VLI-BNE.  It was struck from the New Zealand register today Tuesday 10-February-2015 and will enter the Australia register as VH-VOP
Posted by Unknown 0 comments

A change in the North

Oft forgot due to being Darwin based and not often seen in the eastern seaboard, bar its once weekly DRW-ISA-OOL service, Airnorth has some interesting ownership news.

In a press release yesterday Friday 6-February-2015 Airnorth have announced that an 85% controlling stake in the airline has been sold to Bristow Helicopters Australia, part of the worldwide Bristow Group.


“This investment strengthens our position in Australia as it allows us to offer integrated fixed- and rotarywing logistics solutions, a combined offering that has proven valuable to our customers around the world,” said Jonathan E. Baliff, president and chief executive officer of Bristow Group Inc. “We also gain access to key southeast Asian markets where we do not currently operate. We view Airnorth as an exceptional operator, and are culturally and operationally aligned with shared core values of safety, quality and service.”


Bristow Group is the leading worldwide operator of helicopters supporting offshore oil and gas operations, and its Australia subsidiary based in Perth does just that of the coast of Western Australia and Victoria.

Airnorth is the second oldest airline in Australia founded in 1978 with claims on the largest independent regional arline title flying 350,000 passengers annually.  They operate a fleet of 4 Embraer E170 Regional Jets, 5 Embraer E120 Brasilia and 3 SWM Metroliner turboprop aircraft. Their RPT and FIFO/charter route network covers the NT, WA & QLD as well as Dili in Timor-Leste and Manila in the Philippines.

There will be no changes to the services offered by Airnorth and both companies will look to future new options.

The second frame from VZ(NZ) to transition back to VAI is ZK-PBM.

ZK-PBM's final flight was operating VOZ171/170 BNE-VLI-BNE on Wednesday 4-February-2015.  On Thursday 5-February-2015 she was struck from the  New Zealand register.  She is expected to have been registered on the same day in Australia resuming her former registration VH-VUO however the online register on the CASA website is not updated daily like the NZ CAA one.
Posted by Unknown 0 comments

Links to this post
Labels: B738, BNE, Virgin Australia, VLI

In a move that is unlikely to surprise some, Jetgo have announced they will cease flying the Gladstone to Sydney route with final services on Sunday 8-February-2015 citing lack of corporate support making the future of the service unsustainable.

This is the second Sydney service to bite the dust with the original RPT launch route Roma-Sydney never making it off the ground.  Jetgo however will remain in the RPT trade with Brisbane-Tamworth set to launch from Monday 2-March-2015.  The Brisbane-Tamworth service will return an airlink that has been missing since the collapse of Brindabella Airlines, who used to service the route with Jetstream J41s.


“We’ve got a lot of stuff on the dance card,” Bredereck said.  “We are still finding our way and coming to understand the market a bit better.”

Jetgo's charter arm is still humming along with the airline carrying both the LNP and ALP leaders across Queensland during the recent Queensland state election campaign.

An update to the previous POST - the Australian register has now been updated and confirms that as I suspected Virgin Australia Boeing 737-8FE ZK-PBA has indeed returned to her former Australian Registration of VH-VOO.  She was re-registered on Friday 30-January-2015.
Posted by Unknown 0 comments