Virgin Blue are still on track for their re-branding and assault on the Australian domestic market, despite the flooding that has affected 75% of Queensland, including the VB HQ, in the first few weeks of 2011.


Queensland accounts for about 30 per cent of the Brisbane-based airline's domestic business and travel to and from the state has been badly slowed by the floods.

The re-branding is expected to include uniforms, corporate image, aircraft livery, a new business class offering, as well as refurbishments to the lounges in SYD. MEL & BNE.

As mentioned the Virgin HQ building was affected by the flooding


The airline was forced to abandon its Brisbane headquarters when water filled underground carparks.
By yesterday, the company had moved back into one building and was awaiting repairs to the other three.

As posted previously I work a few buildings further up the road and took this photo of the VB HQ, Thursday 13-January-2011 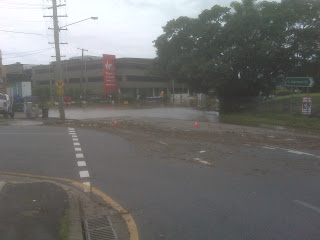