This bird was originally registered to Sounds Air as ZK-KLC on 15-Jan-2004, after importation into NZ as VH-BQR.

After flying for Sounds Air and sister companies it was sold to Iszard Pacific Aviation of Spring Hill as part of the deal which saw Sounds Air take ownership of former Iszard Pacific Cessna Caravan ZK-TZR, as well as the reregistration from KLC to TZT.

The reregistration took place on 23-Sept-2008. It is recorded as changing ownership to Iszard's on 02-Oct-2008, the same day it was noted flying from Picton to Taupo. It then was noted on 04-Jan-2009 operating Taupo-Omaka-Picton. On 18-Jan-2009 it was noted in Wellington possibly operating a Sounds Air service.

It is still registered to Iszard Pacific, but since it has been in Sounds Air territory for the past month, there is doubt as to whether it is still with them or has reverted back to Sounds Air.

Today it was parked up and tied down at Omaka. 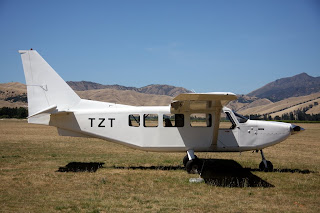