Happy New Year
I want to start off the year by wishing everone a safe, properous, and happy New Year, full of many great spotting opportunities.

27-Dec-20008
Arriving late afternoon/early evening into Woodbourne was French Army Casa 235 "105" 52-IG. This movement was part of a larger flight, arriving from Ohakea and departing to Wellington. The full routing was Noumea-Whenuapai-Ohakea-Woodbourne-Wellington. The Casa then flew Wellington-Whenuapai-Noumea the following day 28-Dec-2008

31-Dec-2008
Airwork/Airpost Boeing 737-219QC ZK-NQC arrived into Woodbourne from Auckland. NQC was noted on 02-Jan-2009 parked behind the skyhawk pen between #4 & #5 hangers at Woodbourne. It is believed that it is at Woodbourne for Safe Air to either undertake repainting or more maintenacnce work. 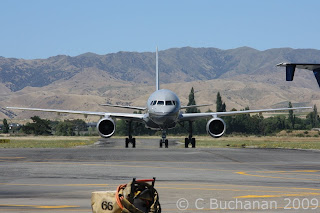