Marlborough's famous summer strong gusty NW/NNW winds were at it again today. While nowhere near as bad as the winds regularily seen at Wellington, they can still surpass cross wind limitations for the scheduled aircraft that operate into Woodbourne. For the first time in a while it was noted that the lighter aircraft were using Grass 28, the smaller cross runway. Seen in the chart below. 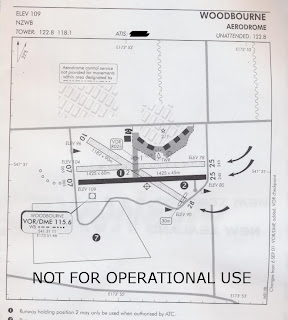 air2there, Sounds Air and Flight Corp were all noted using this runway to try and combat the effects of the strong gusty cross winds. Air New Zealand Link's B1900Ds and Q300s still used the main runway 24. Interestingly enough the 1900Ds have the specs to operate from grass 28 but due to there being no operational stats available they do not. The last scheduled Eagle Air flights to operate from grass 28 were in the Embraer Bandeirante's, which regularily used grass 28 in difficult cross wind situations.
Posted by Unknown